This page is about Mehitak. Visit Artemia to see his Nodos spirit.

Mehitak Pore (メヒタカ・ポレ Mehitak Pore) is a Nodos who has a contract with the Silver Tribe.

In the Series Edit

He is a Nodos from the Planet Pore. Despite having destroyed many planets in the past, he now despises fighting, and hates to see others hurt as a result of it. His red Heroic Tribe form, "Artemia", is capable of firing massive energy beams which can engulf entire planets. Artemia also possesses the ability to turn its body into energy, which can reflect or refract energy weapons. However, it is vulnerable to gravity-based laser beams. Mehitak will not eat anything with a 'life', instead drawing sustenance by consuming raw matter such as metal. Artemia's power is thought to be Light, but is then revealed to be Waves. 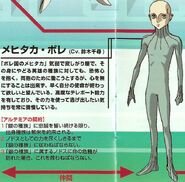 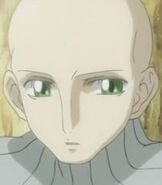 Add a photo to this gallery

Retrieved from "https://heroicage.fandom.com/wiki/Mehitak_Pore?oldid=4514"
Community content is available under CC-BY-SA unless otherwise noted.