Bellcross is a Nodos. Visit Age to see his host.

The 'essence' of the Heroic Tribe life-form within him, which is stored in a stone that is wrapped around the optical nerve of Age's right eye. When summoned, Age's body is enveloped with that of Bellcross. Bellcross is considered to be the strongest of the remaining Heroic Tribe. It is shown to have the ability to absorb its enemies' life force and release it as a destructive energy blast. Bellcross has a humanoid body approximately 50 feet (15 m) tall, and joints made of very large blue spheres. Bellcross, like the other remaining members of the Heroic Tribe, apparently lives only for destruction and contest over its siblings of the Heroic Tribe, though it could apparently counter all the other 4 Nodos's powers with ease. When he enters Frenzy his entire body is covered in a red aura, his eyes and the spheres on his body change to glowing red, and his normally dark-blue body turns black. While Frenzied, he releases powerful shock waves whenever he moves through space, powerful enough to destroy nearby ships. Iron Tribe computers calculated that if he continued to remain in Frenzy, he would ultimately release energy on the scale of a supernova explosion. Eventually, while Bellcross is in Frenzy his armor expands, crystal-like protrusions extend from the spheres at his shoulders and hips, and he sprouts a long, prehensile tail with a bladed tip.

Bellcross's main ability is originally thought to be existence, but it is later revealed that he is the key to The Golden Tribe's power. 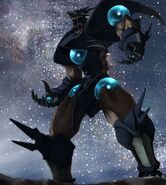 Add a photo to this gallery

Retrieved from "https://heroicage.fandom.com/wiki/Bellcross?oldid=4438"
Community content is available under CC-BY-SA unless otherwise noted.